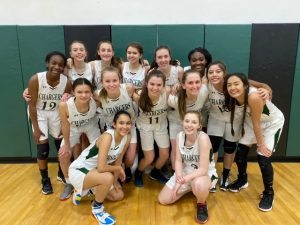 The Chargers Girls Varsity Basketball team advanced to the program’s first region championship game by defeating Cibecue 36-29 on Tuesday. The team will return to Fort Thomas on Friday 2/7 to play the host #1 seed Apaches at 5:15pm. The win earns the Chargers an automatic bid into the 1A State Tournament, which begins on 2/20.

Sophomore point guard Mariah Dominguez once again led the Chargers in scoring with 14, but as it has been all season, the win was a complete team effort. The Chargers trailed by one at the end of the third and used yet another strong fourth quarter to earn the victory. The win moves Arete to 18-5 overall on the season, the best record in program history as well.

Boys Varsity basketball lost to #1 Fort Thomas in the semifinals, 88-40. Although they will not receive an automatic bid to the state tournament, the boys hope to earn an at large bid after a #13 final season ranking.