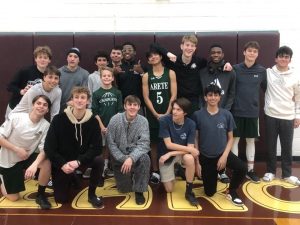 For the second year in a row, both Arete Prep Varsity basketball teams have qualified for the AIA 1A East Region Tournament. The top four teams in the regular season earn the right to travel to Fort Thomas Tuesday 2/4, to play for an automatic state bid. The tourney champion and runner up earn automatic state qualification. The boys used a late season run to qualify, winning their last two regular season games Thursday (beating Superior 51-44) and Friday (downing Ray 70-41) to claim the #4 seed. Even more impressive, the Chargers won both without one of their leading scorers in Brandon Fish, who was out with an injury but hopes to return this week. It was a total team effort from the boys this week, with balanced scoring, unselfish play, and tough defense earning them a chance to continue the season. They will take on #1 Fort Thomas, who the Chargers upset in the final last year, Tuesday at 5:30pm. Outstanding job Coach Caviness, staff, and players!
The girls earned the #2 seed, after a 5-1 regular season with their only loss coming to #1 Fort Thomas. They also picked up wins over Superior (41-14) and Ray (28-26) to earn that spot. The Chargers continue to add to their program record for wins in a season, and will hope to earn an at large tournament bid even with a semifinal loss. They will matchup against #3 Cibecue Tuesday at 4:00pm. Congratulations to Coach Howell, staff, and players as well!
The Chargers girls program have played their first JV games this season. The JV Chargers are 4-0, with one game left to play on Monday vs. Anthem Prep. The defeated Superior 32-7 on Thursday night. With this high energy, dedicated group, coached by Michael Naaktgboren, the future looks bright for the girls program!
The semifinal winners will return to Fort Thomas on Friday to play for the tournament championship.
Game details will be updated as they become available. Follow postseason action at:
AZPreps365
Go Chargers!
Chargers Official Sponsor
Feb
24