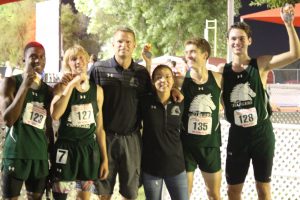 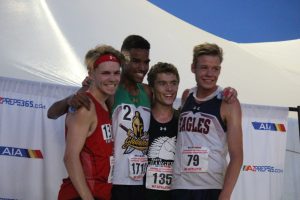 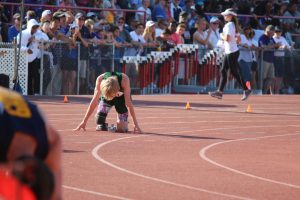 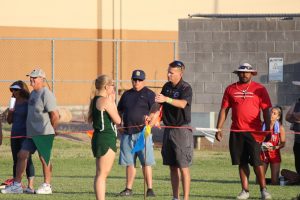 On Friday the Chargers got started with our girls 4x800m relay with Sarah, Bryn, Alissa, and Daniela, running a 17 second PR and finishing 9th.  Logan Hansen set a new PR of 54.18 in the 400m in his first state meet.  Also in his first state meet Chris Akpede set PR’s in both the 100m (11.69) and 200m (23.52), just missing the 200m final.  Both of Chris’s PR’s are sophomore records.  Also setting a new sophomore record was Chase Hampton who ran a 52.27 in the 400m.  His time also qualified Chase for the finals on Saturday.  We finished Friday with our boys 4×4 relay who ran a season PR of 3:33 and advanced to the finals as well.
On Saturday we had Alissa Kassebaum and Daniela Iniguez in the 1600m.  Alissa ran a new PR of 5:52 and placed 14th while Daniela came in 24th.  Lillie Whitehead and Chloe Stoops threw the exact same distance in the discus and were able to finish tied for 11th.  In his first ever finals race Chase ran a blazing new PR, for the second day in a row, and finished 6th with a time of 52.14.  Adam Whitehead, despite being sick all week, ran a courageous 3200m and finished 2nd.
Our last event of the meet was the boys 4x400m relay.  Coming into the finals with 3 sophomores and 1 junior, we knew they had to run their best race of the season to get on the podium.  Let me tell you they did just that.  Starting things off was Chris Akpede who ran incredible lead off leg with a split time PR of 51.3.  Logan Hansen, in his first state meet final, improved on his split time PR from Friday night and ran a 52.3.  Having only 45 minutes to rest after his 3200m race, Adam Whitehead ran a gutsy 54.6 to get the baton to Chase as our anchor leg.  Chase ran one of the fastest split times in school history with a 50.8 to help our team set a new school record of 3:29.48.  This incredible performance by our team put them on the podium by finishing 4th.  It was an thrilling race that ranks up there with some of the best our school has ever been a part of and broke a record I did not think would be broken for a long time.  Congratulations guys!
With the season over it’s time to talk about celebrating our teams accomplishments.  There will be a school Spring sports awards night on May 15th.  The HS awards portion will start at 7pm.
I want to give a big thank you to all the parents who have done such a great job of supporting our team this season.  With the food, water, wet towels,, spray bottles, canopies, and cheering voices, it helped our team perform at their best each and every meet.  Thank you!
– Coach Caviness
Chargers Official Sponsor
Feb
24